The Misbehavior of Markets: A Fractal View of Financial Turbulence

Mathematical superstar and inventor of fractal geometry, Benoit Mandelbrot, has spent the past forty years studying the underlying mathematics of space and natural patterns. What many of his followers don’t realize is th… more

Fix the Culture, spread awareness to get awareness
Adoption of analytics tools and capabilities has not yet caught up to industry standards. Talent has always been the bottleneck towards achieving the comparative enterprise adoption. One of the primal reason is lack of understanding and knowledge within the stakeholders. To facilitate wider adoption, data analytics leaders, users, and community members needs to step up to create awareness within the organization. An aware organization goes a long way in helping get quick buy-ins and better funding which ultimately leads to faster adoption. So be the voice that you want to hear from leadership.

Q:Explain what a long-tailed distribution is and provide three examples of relevant phenomena that have long tails. Why are they important in classification and regression problems?
A: * In long tailed distributions, a high frequency population is followed by a low frequency population, which gradually tails off asymptotically
* Rule of thumb: majority of occurrences (more than half, and when Pareto principles applies, 80%) are accounted for by the first 20% items in the distribution
* The least frequently occurring 80% of items are more important as a proportion of the total population
* Zipfs law, Pareto distribution, power laws

Examples:
1) Natural language
– Given some corpus of natural language – The frequency of any word is inversely proportional to its rank in the frequency table
– The most frequent word will occur twice as often as the second most frequent, three times as often as the third most frequent
– The accounts for 7% of all word occurrences (70000 over 1 million)
– ‘of accounts for 3.5%, followed by ‘and
– Only 135 vocabulary items are needed to account for half the English corpus!

2. Allocation of wealth among individuals: the larger portion of the wealth of any society is controlled by a smaller percentage of the people

Additional: Hard disk error rates, values of oil reserves in a field (a few large fields, many small ones), sizes of sand particles, sizes of meteorites 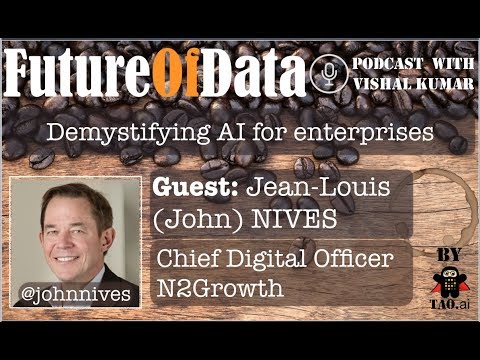 @JohnNives on ways to demystify AI for enterprise #FutureOfData #Podcast

You can have data without information, but you cannot have information without data. – Daniel Keys Moran 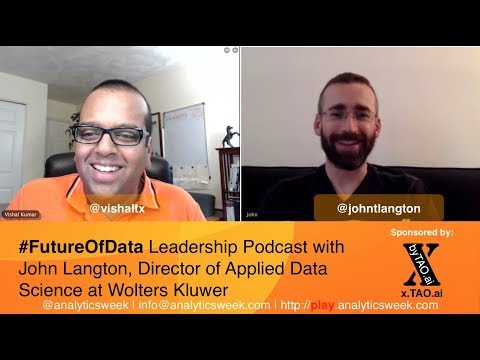 As recently as 2009 there were only a handful of big data projects and total industry revenues were under $100 million. By the end of 2012 more than 90 percent of the Fortune 500 will likely have at least some big data initiatives under way.